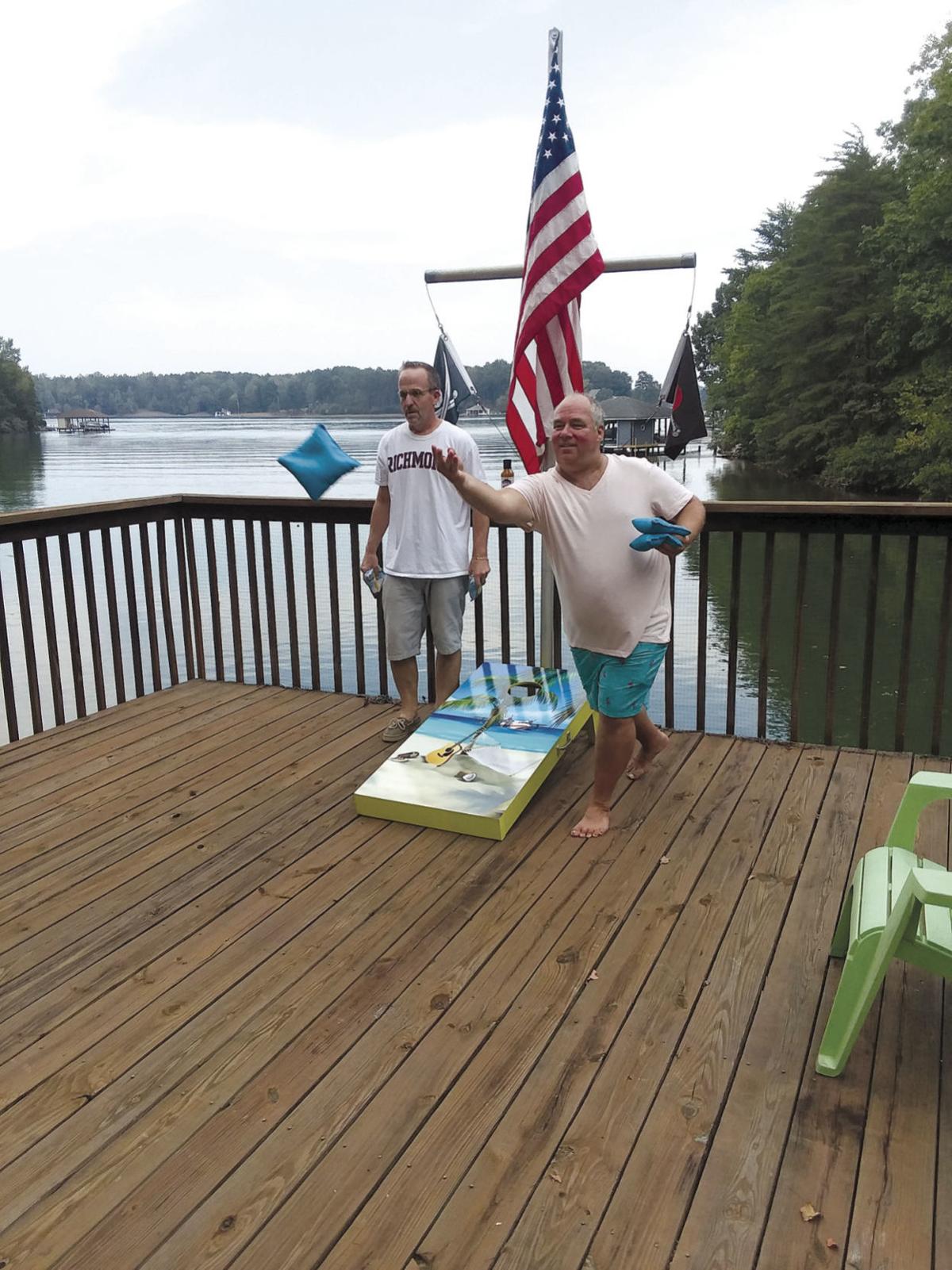 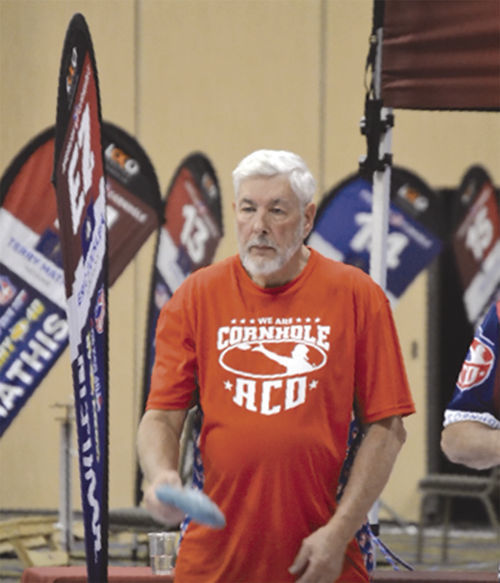 Jack Stevens has his gameface on during a tournament. 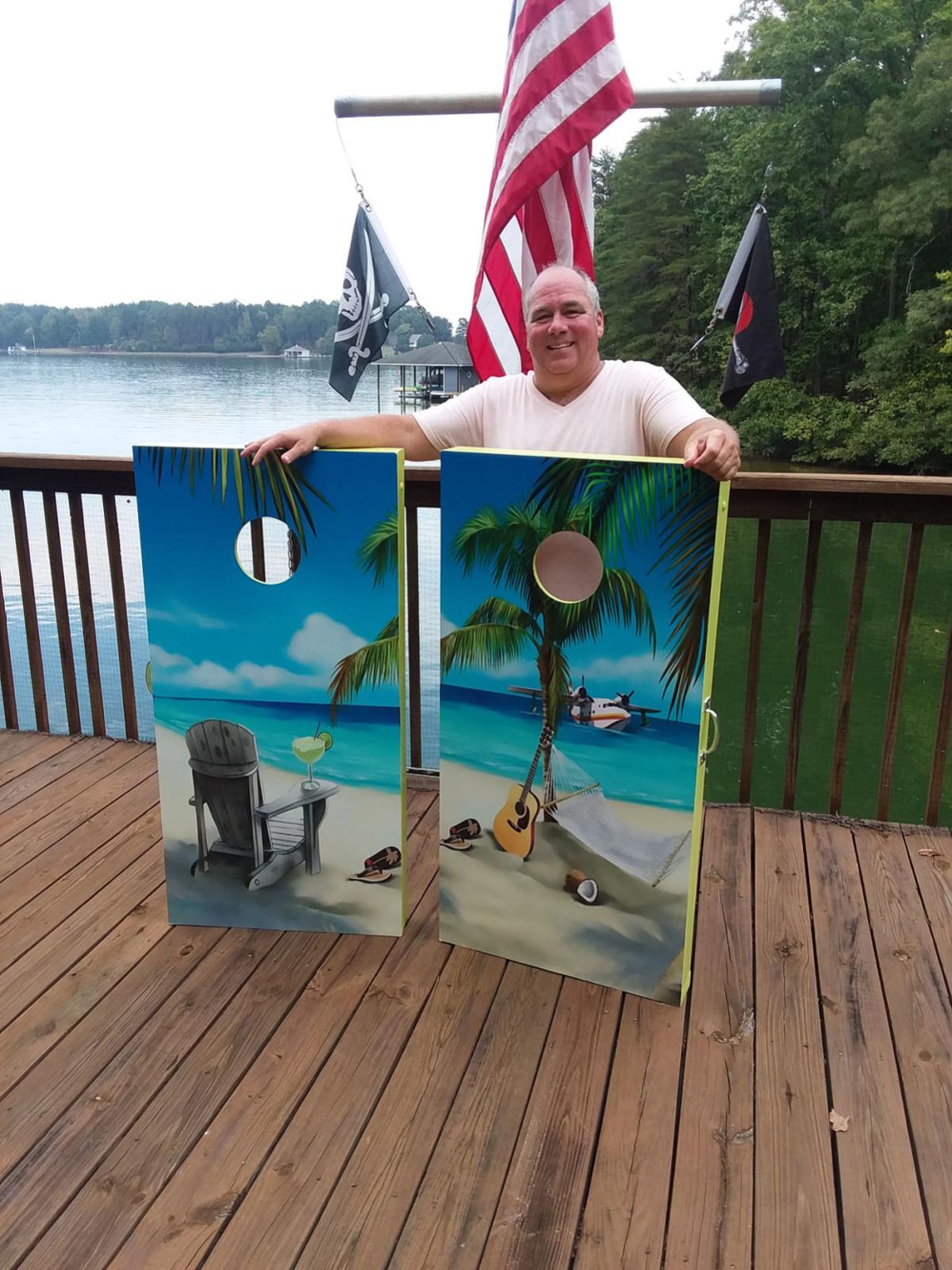 Cornhole boards (like Tony Robertson’s) can range from $250 to $400 depending on what type of customization is needed. 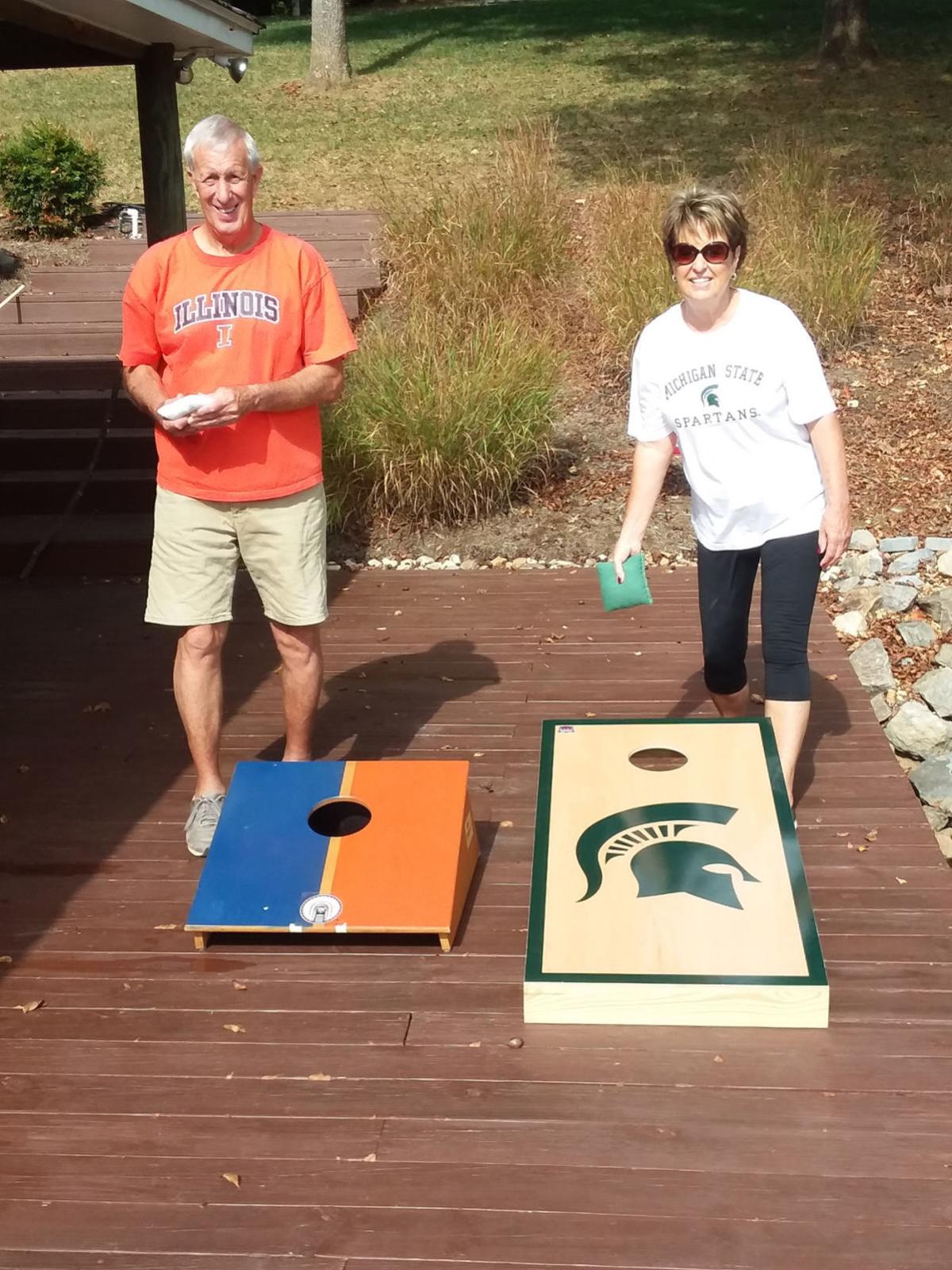 Mike and Karen Schmitz of Effingham, Illinois, use University of Michigan boards made by Karen’s son, Adam, a proud Trojan graduate, on their Union Hall dock. Smaller boards such as the one decorated in Fighting Illini colors are easy to transport.

Jack Stevens has his gameface on during a tournament.

Cornhole boards (like Tony Robertson’s) can range from $250 to $400 depending on what type of customization is needed.

Mike and Karen Schmitz of Effingham, Illinois, use University of Michigan boards made by Karen’s son, Adam, a proud Trojan graduate, on their Union Hall dock. Smaller boards such as the one decorated in Fighting Illini colors are easy to transport.

Most Lakers likely have come across cornhole, a game that involves tossing 6-inch square beanbags at a pair of slanted wooden boards, often homemade and decorated with painted schemes and decals.

The name likely evolved from the combination of dried corn as a bag-filler option and the 6-inch diameter hole in each board — a 3-point scoring target akin to a ringer in horseshoes. Bags that rest on the board at the end of each round of play — called a frame — score one point each.

Cornhole has roots in an 1883 patent for “Parlor Quoits,” which involved bean-filled bags tossed at slanted boards and intended as indoor horseshoes. Rights were later acquired by a Massachusetts toy manufacturer that marketed “Faba Baga,” which used target boards with several different sized holes and different point values. A September, 1974 Popular Mechanics article detailed a game called “Bean-bag Bull’s-eye” in which each player threw two bags in succession at boards somewhat shorter than those used today. Modern cornhole players alternate throwing four bags per inning or frame of play.

The American Cornhole Organization, established in 2005 and headquartered in Milford, Ohio, claims on its website to be “the governing body for the sport of cornhole.” The American Cornhole League was founded more recently, in 2015, “to promote the sport on every level,” and offers software and apps to manage leagues, tournaments, special events and player development.

“There’s some place to toss bags with other cornholers nearly every night of the week,” Jack said.

After moving back to Virginia from Houston in 2004, the couple, who retired from Hewlett Packard, had operated Lakeside Embroidery before closing the business a couple of years ago.

“Now we can really focus on being retired — and cornhole,” Jack said.

While Jack, now 73, has been throwing seriously for more than seven years, Paula caught the bag bug about four years ago when her backyard-honed technique began consistently winning matches at Friday night gatherings. She earned ACO’s “pro” designation two seasons ago. Again this season, she ranks among America’s top 80 players. Now ranked No. 37, she’s the only female in ACO’s top 40.

Rankings are based on matches won at sanctioned, officiated events, Jack said.

“Paula is really consistent,” he said. “It’s not unusual for her to throw four-baggers [all four bags of a frame in the 3-point hole] back to back to back.”

But competition is stiff.

“If you’re not getting at least three of four through that hole most frames, you’re not really a factor in sanctioned competition,” Jack said.

Nonetheless, people of all abilities can enjoy the game.

“Local events typically include blind-draw doubles and newbies improve by being teamed up with better players,” Paula said. “Cornhole is a family game that kids to seniors can enjoy. There are some 12-year-olds around here who can thrash adults several times their age.”

ACO promotes a family-friendly atmosphere at its tournaments, too. Last season’s world competition in Las Vegas (where Paula received women’s player of the season and women’s world champion recognitions) lasted five days, with many competitors bringing family members to watch and play.

“There were 40 sets of boards nearly fully occupied for 12 or 13 hours each day,” Jack said. “Everyone there gets to toss a lot of bags.”

Jack, an ACO-certified official, helps organize regional tournaments, including one recently at the Bedford Moose Lodge that attracted 22 single entrants and 14 doubles teams.

A major event at The Greenbrier in February 2019 saw more than 150 competitors from nine surrounding states competing in six divisions.

Many recreational cornhole players play on homemade sets, typically made from plans found on the internet. Professionally-made tournament boards are 24 inches wide and 48 inches long, with hefty 5/8-inch or ¾-inch plywood faces, braced so there is no bounce when bags land.

Boards are placed exactly 27 feet from front to front, with the holes 33 feet apart. Official bags weigh precisely 1 pound, have a smooth and a sticky side resulting from carefully-chosen fabrics, and are filled with resin pellets (not dried corn or beans), so there is no degradation or moisture absorption to change their weight or sliding/sticking behavior over time.

“Today there are approximately 40 manufacturers of pro-quality bags, who sell them for about $40 per set of four,” Jack said.

“A pair of quality boards runs $250 to $400, depending on how fancy or customized the graphics are.”

“Airmail” is the official term for thrown bags that swish through the hole rather than sliding or bouncing into it. Throwing an airmail is useful when an opponent’s bag is a blocker lying in front of the 3-point hole destination. Any bag that is touching or has touched the floor or grass on which the boards rest is ruled “dirty” and scores no points, even if it has bounced onto the board’s surface. Tournament games end when one player or team has amassed 21 or more points. In each frame, opponents often cancel out each other’s points leading to a wash (no points added to either score) until the next frame. Games can easily last 15 to 20 minutes.

“The more you practice, the better you get,” Paula said. “I’m willing to throw any time, any place, with players of any ability.”