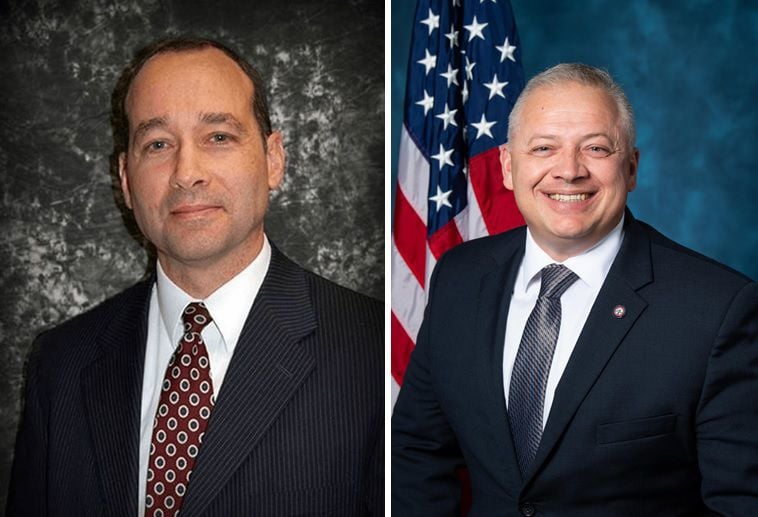 Republicans say they are ready to end the bitter battle between Rep. Denver Riggleman and Bob Good and picked June 13 for the convention to choose their party nominee.

The 5th Congressional District Republican Committee — made up of local party leaders across central Virginia — held a two and a half hour conference call May 11 to discuss and vote on the convention, which had to be delayed from its original April 25 date because of the coronavirus pandemic.

The committee considered two options: holding the convention at one location or multiple locations across the sprawling district that stretches from Fauquier County to the North Carolina border and includes Franklin County and part of Bedford County. Multiple committee members expressed concern about the risk of problems or mischief if multiple locations were used that could risk the result being challenged in court.

The convention will be held at the Tree of Life Ministries in Campbell County. Instead of an event inside with speeches and festivities, delegates will line up in their cars at the church parking lot, fill out their ballots and return them without exiting their cars. Over 3,500 delegates have been elected to participate.

Some committee members suggested giving themselves more time to plan for the unusual convention, but others said they wanted to put this race to rest.

Riggleman, R-Nelson, and Good are locked in a competitive race unfolding while the candidates and voters are stuck inside their homes. Good is a former Campbell County supervisor, and he recently stepped down as associate athletics director and chief fundraiser for athletics at Liberty University to focus on campaigning.

They clashed during a debate over the radio earlier this month. Good took aim at Riggleman’s conservative credentials.

Riggleman, who has identified himself as a conservative “with a pretty mean libertarian streak,” inflamed social conservatives last year when he officiated a same-sex marriage. A handful of activists censured him, but Riggleman stood by what he did.

Conservative activists have taken issue with his stance on abortion, but Riggleman hasn’t shied away from his stance that he believes life begins at the fetal heartbeat, and there should be exceptions for abortions. Good said he is “100% pro-life from conception without exception.”

During the debate, Good rattled off various positions. He wants to repeal the Affordable Care Act, limit the federal government’s involvement in education, and reduce the deficit — which has ballooned during the Trump administration. He mentioned that during his time on the Campbell County Board of Supervisors, he supported a resolution asking the state legislature to allow localities to have the authority to regulate transgender people using public bathrooms.

“When I get to Washington, my priorities are going to be to defend Judeo-Christian principles upon which our nation was founded,” he said.

Riggleman mentioned several times throughout the debate that President Donald Trump endorsed him. He said he’s been working on issues important to the 5th District, like getting Virginia added to the crop insurance program for industrial hemp to help with the expansion of hemp crop. He’s secured funding for broadband expansion. Recognizing the economy has come to a halt, he recently introduced a bill to extend the opportunity zone program from 2026 to 2030, in the hope it will be an important part of the economic recovery. Part of the Tax Cuts and Jobs Act of 2017, the program provides tax benefits to those who invest in economically distressed areas.

“Voters in the 5th District have a very simple choice to make,” Riggleman said. “Do they want a congressman who has a proven record of furthering President Trump’s conservative agenda, or do they want to take a flier on an unproven, untested and unknown supervisor?”

Riggleman pushed for a firehouse primary from the beginning, which would provide broad participation in the nomination contest. Republicans often use conventions to pick congressional nominees.

The process is limited to a smaller number of voters, allowing faithful party activists to ensure ideological purity. The coronavirus crisis forced the congressional committee to change its plans. The Riggleman camp tried to build committee support for filing a lawsuit to get the state to manage the election on June 23, which is when the Democrats in the 5th District will choose their nominee. The committee rejected the proposal and stuck with a convention with modifications.

“The closed-off nature of the process has kept a lot of voters in the dark,” Riggleman said.

Riggleman supporters shared a draft of a lawsuit a Republican activist sent to committee members before the vote, which they took to mean would be filed against them if they voted for a proposal to try and switch from a convention to a primary. The lawsuit was never filed.

For the last couple weeks, Riggleman has been posting videos on social media from his supporters accusing Good of being behind the lawsuit, which they described as “voter intimidation.”

“The division this has created in our party is vile,” Kimmy Kruskamp, a Greene County convention delegate, said in a video.

Good has said his campaign wasn’t involved in the lawsuit.

“Denver can’t win this nomination, and he knows it,” Good said during the debate. “That’s why you’re seeing the tactics he’s deploying. He’s desperate to hold on to power.”

Melvin Adams, the chairman of the congressional committee, said May 11 he’s been getting a lot of feedback from delegates who aren’t pleased with the negativity that has engulfed the race. He urged the committee members to set aside who they support to ensure the convention goes well.

“It’s time for us to stop working against each other and work together to get this done,” he said.

Rep. Denver Riggleman is being himself

A small number of Republicans on a congressional district committee tried to censure Rep. De…